BIOHARVEST SCIENCES APPOINTS ASTRONAUT CHRIS HADFIELD TO THE BOARD OF ADVISORS

VANCOUVER, CANADA, AND REHOVOT, ISRAEL, December 1, 2021 – BioHarvest Sciences Inc.(“BioHarvest” or the “Company”) (CSE: BHSC) has appointed renowned astronaut Chris Hadfield to its board of advisors as part of a drive to leverage its biotech technology platform to provide essential nutrition and active ingredients for space exploration and potential new settlements in space.

Hadfield brings 40 years of scientific experience to the Canadian-Israeli biotech firm, which has developed and patented a plant bio-cell technology, called BioFarming, capable of growing the active and beneficial plant based ingredients at industrial scale, without the need to grow the plant itself.

“Chris’s unparalleled experience will help marry our plant cellular biology expertise with space science,” said BioHarvest CEO Ilan Sobel. “He is a great addition to our advisory board at this phase of our growth, and he’ll help us in our drive to be a global biotech leader.”

BioHarvest’s BioFarming technology has the potential to efficiently produce primary metabolites such as premium proteins that are needed to provide required nutrition for humans to live in space. It can also produce antioxidant compounds with antioxidant activity that can help reduce human cellular stress and prevent damage caused by microgravity and ionizing radiation, which is a critical health challenge experienced by astronauts while in space.

Hadfield joined the BioHarvest board of advisors a few weeks after visiting the Company’s research and development laboratories in Rehovot, Israel.

BioHarvest’s proprietary platform technology has the potential to make a significant impact on the world as well as in bio-space science,” Hadfield said. “The company has built a world-class team of scientists, and I look forward to working with them, with my fellow advisors, to scale BioHarvest’s solution.” 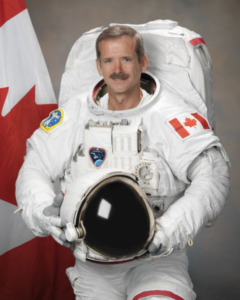 The Canadian-born reserve colonel is an astronaut, engineer, and RCAF pilot who has flown 3 space missions, done 2 spacewalks, and commanded the International Space Station. He was named the top test pilot in both the US Air Force and the US Navy, and served as NASA’s Director of Operations in Russia.

Hadfield is an adjunct professor at the University of Waterloo, an adviser to SpaceX and Virgin Galactic, and chair of the board of the Open Lunar Foundation. He also leads the Space stream at the Creative Destruction Lab tech incubator, and is co-creator and host of TV series on BBC and National Geographic, as well as a 4-time internationally best-selling author.

BioHarvest, which can produce red grape, olive, and pomegranate cells, recently announced that it has successfully grown coral-shaped clusters of Cannabis trichomes  in bioreactors as well (see news release dated August 19 and September 1, 2021).

The company recently announced revenues of  USD 688K in the third quarter of 2021, representing 44% growth over the previous quarter, based on promising early demand of its flagship red grape-based VINIA® product (see news release dated October 5, 2021).

BioHarvest Sciences Inc. (CSE: BHSC) is a fast-growing Biotech firm listed on the Canadian Securities Exchange. BioHarvest has developed a patented bio-cell growth platform technology capable of growing the active and beneficial ingredients in fruit and plants, at industrial scale, without the need to grow the plant itself. This technology is economical, ensures consistency, and avoids the negative environmental impacts associated with traditional agriculture. BioHarvest is currently focused on nutraceuticals and the medicinal cannabis markets. Visit:www.bioharvest.com.

Information set forth in this news release includes forward-looking statements that are based on management’s current estimates, beliefs, intentions, and expectations, and are subject to a number of risks and uncertainties that could cause actual results to differ materially from those described in the forward-looking statements. There is no assurance that strong sales metrics experienced to date will result in future demand or that proposed additional marketing expenditures will result in increased sales. Markets for nutraceuticals are unpredictable and subject to changes in consumer tastes and trends as well as economic factors beyond our control.  Delays and cost overruns may result in delays achieving our objectives obtaining market acceptance, and regulatory approvals for geographic expansion is subject to risk and cannot be guaranteed. There is no assurance that the Company sales revenue for 2022 will reach USD 5 to 7 million and there is no assurance that the Company cash flow breaking point will be achieved in 2023. There is no assurance of commercial availability of our Cannabis product in 2022 or that the Company achieves the conversion of the two tons VINIA® facility to Cannabis production in 2022. These things are subject to construction and approval delays and uncertainties that may be beyond the control of BioHarvest. Projected sales of Cannabis will require the Company to obtain production and/or export licensing which cannot be assured.

Readers are cautioned that revenue alone do not give an accurate picture of the financial position of the Company and should be read in the context of the Company’s annual and quarterly financial statements.

Neither the Canadian Securities Exchange nor its Regulation Services Provider accept responsibility for the adequacy or accuracy of this release.