VANCOUVER, CANADA, AND REHOVOT, ISRAEL, December 8, 2021 – BioHarvest Sciences Inc.(“BioHarvest” or the “Company”) (CSE: BHSC) has announced that it has produced a meaningful amount (10 kilograms) of full-spectrum Cannabis biomass at a commercial scale without growing the plant itself. (For full illustration, watch the “Cannabis Without Plants – History in the Making” video at https://youtu.be/NAurl6oa1xo) 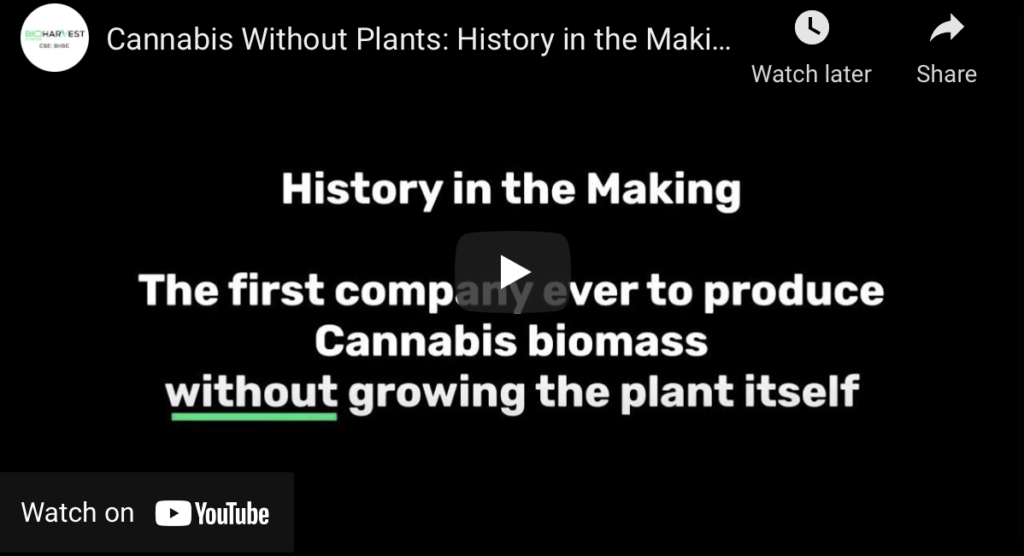 It is the first time that any group – in either industry or academia – has successfully produced meaningful quantities of full-spectrum Cannabis biomass without growing the plant itself. The Cannabis biomass is not genetically modified and was produced using the Company’s proprietary BioFarming technology platform, which grows plant cells in their natural structure in proprietary bioreactors. 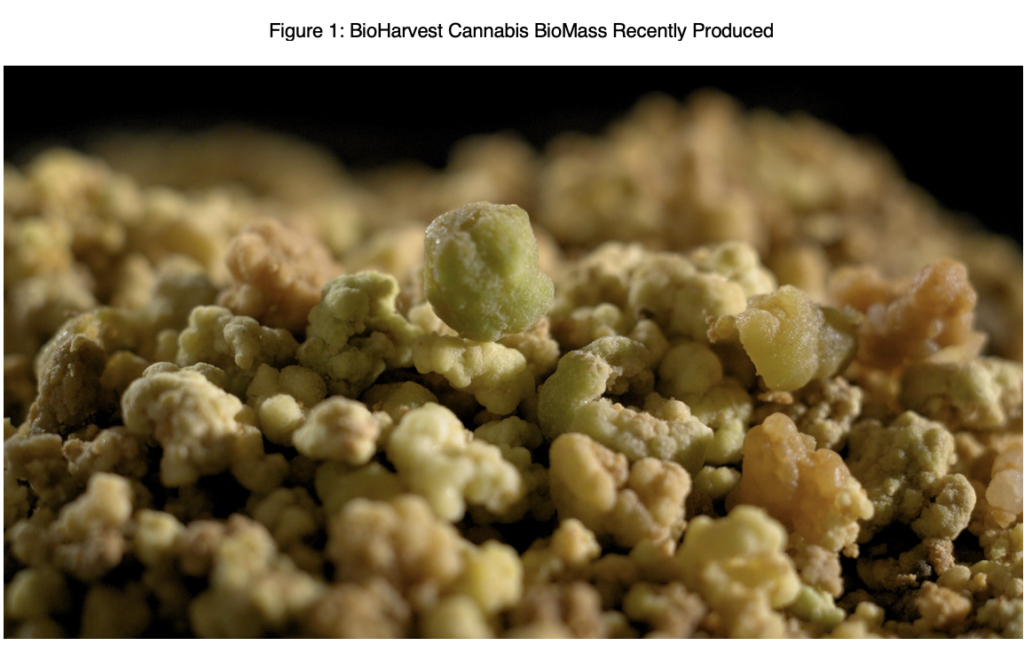 The result of the breakthrough by the Canadian-Israeli biotech firm is Cannabis biomass that is uniquely consistent and clean, resolving two major pain points related to product quality in the medicinal Cannabis industry. Namely – product variability and product contamination.

“The legal Cannabis industry has been waiting for this moment as many of the challenges it has faced are being resolved using BioHarvest’s technology and capabilities,” said BioHarvest CEO Ilan Sobel. “With this milestone, we are ready to start engaging with key players in the global Cannabis industry for the right partnerships ahead of the introduction of our new Cannabis products.”

The biomass consists of Cannabis cells, including Cannabis Trichome cells containing Cannabinoids such as CBD, THC, as well as other compounds that are naturally occurring in the Cannabis plant. BioHarvest’s Cannabis Trichome cells are amalgamated in a proprietary high-density coral-shaped structure, which enables a Trichome density (number of trichomes per unit surface) of up to 200 times greater than the conventional agriculture case. 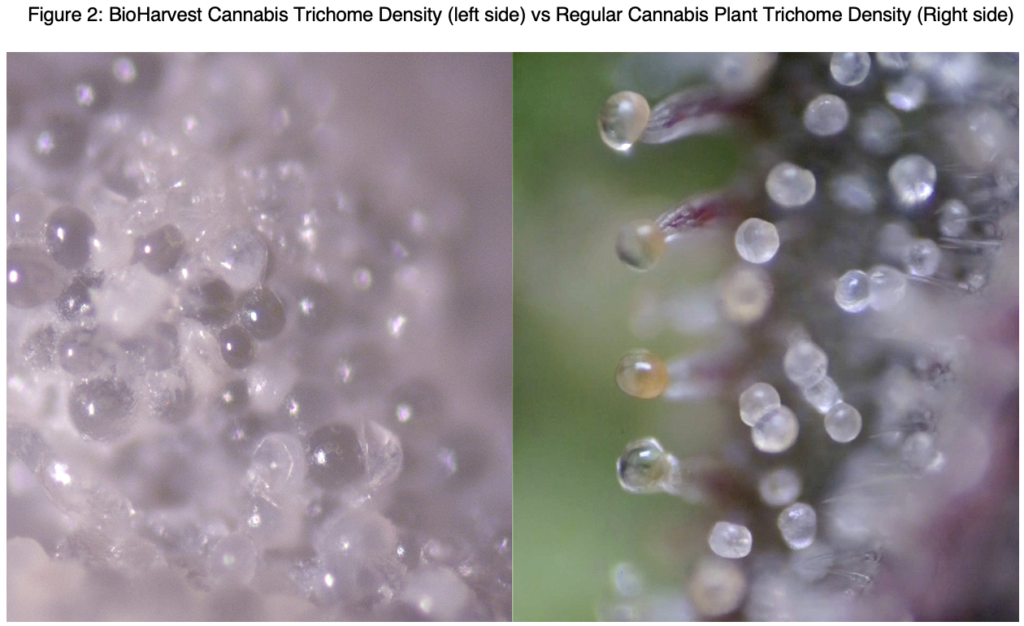 The result is a win for global sustainability, ushering in a new era by conserving land not just from Cannabis cultivation but that of other plants. BioHarvest is already achieving this with red grapes, olives, and pomegranates. BioHarvest’s production facilities use some 95% less physical space than traditional farming; for reference, one seven-foot bioreactor produces what would require 240,000 square meters of land annually for the production of the key polyphenols contained in its red grape VINIA® product.

The Cannabis biomass produced by BioHarvest’s technology has significant advantages compared to Cannabis produced through conventional cultivation, summed up by what the Company refers to as the 5 Cs:

“For its therapeutic qualities, Hemp-based CBD holds a significant potential for the F&B industry to which we have been supplying ingredients for over 40 years,” said Vince Pinneri, President of Batory Foods, a leading ingredient distributor for the US food industry. “That is why we decided to team up with BioHarvest in order to guarantee the F&B industry the highest quality CBD with fingerprint consistency and ultimate cleanliness that their BioFarming technology can produce. The outstanding sustainability credentials of the BioFarming technology will also be well received by the growing population of environmentally conscientious customers. We are looking forward to bringing to the US market the best hemp-based CBD, from BioHarvest, in the near future.”

BioHarvest has a market capital of about CAD$ 152M and has raised about CAD$ 57.3M to date. The Company’s next stage will consist of producing Cannabis biomass in industrial-scale bioreactors. Its offering will consist of multiple strains, carefully selected based on specific indications and B2B customer requirements.

“This major scientific and technological achievement is unprecedented in the Cannabis world and is a strong validation of the superiority of the BioFarming technology,” said CTO Yochi Hagay. “BioHarvest’s global leadership position in plant cell biology is proving itself now on a wide variety of applications.”

Reflecting the breadth of possible applications, earlier this month, BioHarvest appointed renowned astronaut Chris Hadfield to its board of advisors as part of a drive to leverage its biotechnology platform to create products that address the challenges of space exploration. Christ Hadfield joined the BioHarvest board several weeks after a visit to the Company’s laboratories in Rehovot, Israel, when he spent several hours with the Company’s scientists.

Among other examples, BioHarvest’s BioFarming technology can produce primary metabolites that amount to food for humans in space. It also can produce antioxidant compounds that can relieve human cellular stress and damage caused by microgravity and ionizing radiation.

BioHarvest Sciences Inc. (CSE: BHSC) is a fast-growing Biotech firm listed on the Canadian Securities Exchange. BioHarvest has developed a patented bio-cell growth platform technology capable of growing the active and beneficial ingredients in fruit and plants, at industrial scale, without the need to grow the plant itself. This technology is economical, ensures consistency, and avoids the negative environmental impacts associated with traditional agriculture. BioHarvest is currently focused on nutraceuticals and the medicinal cannabis markets. Visit:

Information set forth in this news release includes forward-looking statements that are based on management’s current estimates, beliefs, intentions, and expectations, and are subject to a number of risks and uncertainties that could cause actual results to differ materially from those described in the forward-looking statements. There is no assurance that strong sales metrics experienced to date will result in future demand or that proposed additional marketing expenditures will result in increased sales. Markets for nutraceuticals are unpredictable and subject to changes in consumer tastes and trends as well as economic factors beyond our control.  Delays and cost overruns may result in delays achieving our objectives obtaining market acceptance, and regulatory approvals for geographic expansion is subject to risk and cannot be guaranteed. There is no assurance that the Company sales revenue for 2022 will reach USD 5 to 7 million and there is no assurance that the Company cash flow breaking point will be achieved in 2023. There is no assurance of commercial availability of our Cannabis product in 2022 or that the Company achieves the conversion of the two tons VINIA® facility to Cannabis production in 2022. These things are subject to construction and approval delays and uncertainties that may be beyond the control of BioHarvest. Projected sales of Cannabis will require the Company to obtain production and/or export licensing which cannot be assured.

Readers are cautioned that revenue alone do not give an accurate picture of the financial position of the Company and should be read in the context of the Company’s annual and quarterly financial statements.

Neither the Canadian Securities Exchange nor its Regulation Services Provider accept responsibility for the adequacy or accuracy of this release.